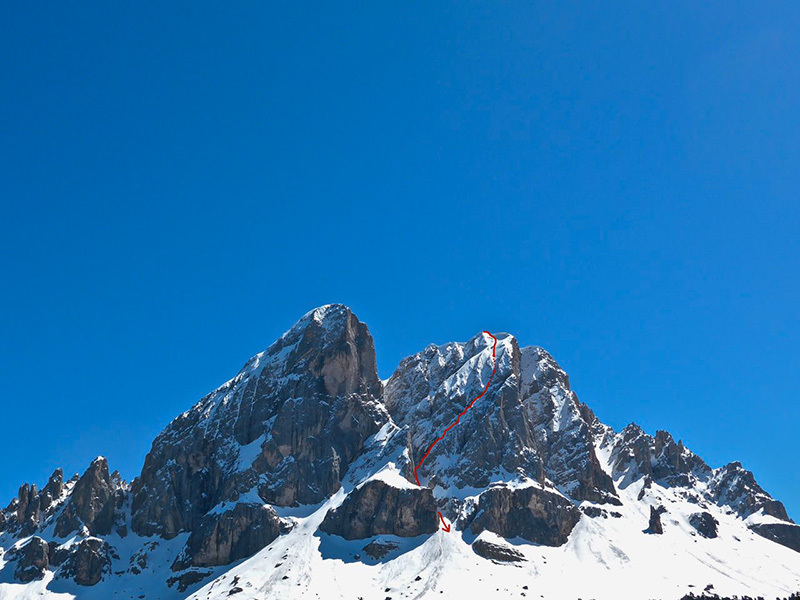 In winter from the Würzjoch pass from the Villnöß valley is closed and the peak can only be reached from Val Badia. While on a family outing Simon noticed that a line of descent from the summit of Cima Piccola had come into excellent condition.

Roberto and Ivan were immediately taken in by the idea and this, they all felt, would be an ideal way to end the winter season in style. The trio set off early in the morning from the Würzjoch pass close to the Refuge Ütia de Börz (2003m) and skinned along alpine meadows and then up the North gully that splits Peitlerkofel's main summit from the Cima Piccola. At the col they ditched their rucksacks, skis and gear and continued up the via ferrata to reach the main summit at 2875m. The splendid views made the effort worthwhile: the Ortles and Pala Bianca to the west, followed by the Aurine Alps,Vedrette di Ries, Grossglockner, Sella, Marmolada and more still.

Before returning down the ferrata to the col they carefully checked the line of ascent down the ridge. From the col they made their way up to the top of Cima Piccola at 2813m.

The descent started on the lefthand side, facing the valley, down the North Face, coasting beneath fearsome icy cornices. The snow was excellent and slightly powdery and they reached a wide open slope that in turn led to gully blocked by a 2-3m rock barrier that blocked the view further down.

The trio established a belay on a spike and abseiled 60m, where they placed another peg and thread before making another 20/25m abseil. They continued their descent with utmost care to avoid costly mistakes and then headed down, rightwards, towards the excitingly steep slope to join up with the North Gully. After the adrenaline rush they then skied through the last sections of the gully to then enjoy the finishing slopes and return to Würzjoch.